Time's Eye
In an instant, Earth is carved up in time and reassembled like a huge jigsaw puzzle. Suddenly the world becomes a patchwork of eras, from prehistory to 2037, each with its own indigenous inhabitants. The explanation for this cataclysmic event may lie in the ancient city of Babylon, where two groups of refugees from 2037- three cosmonauts and three U.N. peacekeepers find allies in nineteenth-century British troops and in the armies of Alexander the Great.

Sunstorm
Returned to the Earth of 2037 by the mysterious and powerful Firstborn, Bisea Dutt is haunted by memories of her five years spent on the strange alternate Earth called Mir, a jigsaw-puzzle world made up of lands and people cut out of different eras of Earth's history. Why did the Firstborn creat Mir? Why was Bisea taken there and then brought back just a day after her disappearance? 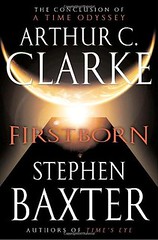 Firstborn
Twenty-seven years ago a mysterious race of aliens known as the Firstborn tried to eradicate all life on Earth with a massive solar storm. The doomsday event was averted, but at an inconceivable price. Now the Firstborn are back- and this time, they are pulling no punches. They have sent a quantum bomb speeding toward the planet: a device that human scientists can barely comprehend, that cannot be stopped or destroyed- and that will obliterate the world.