Ender's Shadow
Growing up is never easy. But try living on the mean streets as a child begging for food and fighting like a dog with ruthless gangs of starving kids who wouldn't hesitate to pound your skull into pulp for a scrap of apple. If Bean has learned anything on the streets, it's how to survive. And not with fists—He is way too small for that—But with brains.
Bean is a genius with a magician's ability to zero in on his enemy and exploit his weakness.
What better quality for a future general to lead the Earth in a final climactic battle against a hostile alien race, known as Buggers. At Battleschool Bean meets and befriends another future commander—Ender Wiggins—perhaps his only true rival.
Only one problem: for Bean and Ender, the future is now.

Shadow of the Hegemon
The War is over, won by Ender Wiggin and his team of brilliant child-warriors. The enemy is destroyed, the human race is saved. Ender himself refuses to return to the planet, but his crew has gone home to their families, scattered across the globe. The battle school is no more.
But with the external threat gone, the Earth has become a battlefield once more. The children of the Battle School are more than heros; they are potential weapons that can bring power to the countries that control them. One by one, all of Ender's Dragon Army are kidnapped. Only Bean escapes; and he turns for help to Ender's brother Peter.
Peter Wiggin, Ender's older brother, has already been manipulating the politics of Earth from behind the scenes. With Bean's help, he will eventually rule the world. 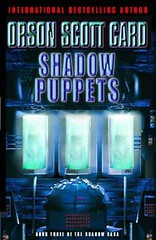 Shadow Puppets
Earth and its society has been changed irrevocably in the aftermath of Ender Wiggin's victory over the Formics--the unity enforced upon the warring nations by an alien enemy has shattered. Nations are rising again, seeking territory and influence, and most of all, seeking to control the skills and loyalty of the children from the Battle School.
But one person has a better idea. Peter Wiggin, Ender's older, more ruthless, brother, sees that any hope for the future of Earth lies in restoring a sense of unity and purpose. And he has an irresistible call on the loyalty of Earth's young warriors. With Bean at his side, the two will reshape our future. 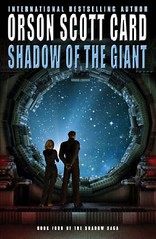 Shadow of the Giant
Bean's past was a battle just to survive. He first appeared on the streets of Rotterdam, a tiny child with a mind leagues beyond anyone else. He knew he could not survive through strength; he used his tactical genius to gain acceptance into a children's gang, and then to help make that gang a template for success for all the others. He civilized them, and lived to grow older. Then he was discovered by the recruiters for the Battle School. 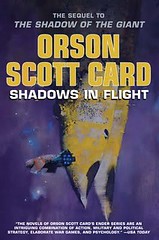 Shadows in Flight
At the end of Shadow of the Giant, Bean flees to the stars with three of his children--the three who share the engineered genes that gave him both hyper-intelligence and a short, cruel physical life. The time dilation granted by the speed of their travel gives Earth's scientists generations to seek a cure, to no avail. In time, they are forgotten--a fading ansible signal speaking of events lost to Earth's history. But the Delphikis are about to make a discovery that will let them save themselves, and perhaps all of humanity in days to come.