Rendezvous With Rama
At first, only a few things are known about the celestial object that astronomers dub Rama. It is huge, weighing more than ten trillion tons. And it is hurtling through the solar system at an inconceivable speed. Then a space probe confirms the unthinkable: Rama is no natural object. It is, incredibly, an interstellar spacecraft. Space explorers and planet-bound scientists alike prepare for mankind's first encounter with alien intelligence. It will kindle their wildest dreams... and fan their darkest fears. For no one knows who the Ramans are or why they have come. And now the moment of rendezvous awaits — just behind a Raman airlock door. 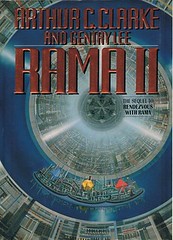 Rama II
Years ago, the enormous, enigmatic alien spacecraft called Rama sailed through our solar system as mind-boggling proof that life existed -- or had existed -- elsewhere in the universe. Now, at the dawn of the twenty-third century, another ship is discovered hurtling toward us. A crew of Earth's best and brightest minds is assembled to rendezvous with the massive vessel. They are armed with everything we know about Raman technology and culture. But nothing can prepare them for what they are about to encounter on board Rama II: cosmic secrets that are startling, sensational -- and perhaps even deadly.

The Garden Of Rama
By the twenty-third century Earth has already had two encounters with massive, mysterious robotic spacecraft from beyond our solar system--the incontestable proof of an alien technology that far exceeds our own. Now three human cosmonauts are trapped aboard a labyrinthine Raman vessel, where it will take all of their physical and mental resources to surviv. Only twelve years into their journey do these intrepid travelers learn their destination and face their ultimate challenge: a rendevous with a Raman base--and the unseen architects of their galactic home. The cosmonauts have given up family, friends, and possessions to live a new kind of life. But the answers that await them at the Raman Node will require an even greater sacrifice--if humanity is indeed ready to learn the awe-inspiring truth. 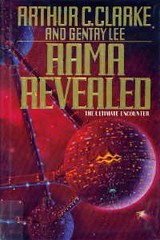 Rama Revealed
On its mysterious voyage through interstellar space, a massive alien starship carries its human passengers to the end of a generations-long odyssey. But the great experiment designed by the Ramans has failed, and Rama III has become a battleground. Fleeing a tyrant, a band of humans ventures into the nether regions of the ship, where they encounter an emerald-doomed lair ruled by the fabulously advanced octospiders. As the octospiders lure the humans deeper into their domain, the humans must decide whether the creatures are their allies of enemies. All the while, Rama III continues its inexplorable journey towards the node, where the climax of their voyage awaits the stunning revelation of the true identity of the beings behind this glittering trek across the cosmos.